The additive colour system is based on the mixing of different light colours. When two primary colours are mixed, you get a lighter colour. Mix the three primary colours (red, green and blue) and you will get white light. Unlike with paint, yellow is not a primary colour.

The best example of the additive colour system can be found in computer screens and televisions. Use a strong magnifying glass and you’ll notice that every pixel consists of a red, green and blue sub-pixel. By playing with the brightness of these sub-pixels, you can create any light colour.

The image below shows the mixing scheme of the additive colour system. It looks like this: 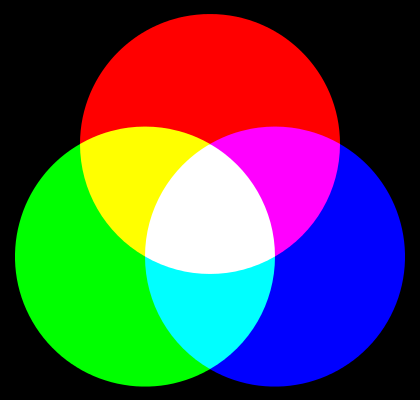 RGB lighting can form all colours, ranging from warm orange to cool blue. It is often used in LED strips. In RGB LED strips we distinguish three types:

Free delivery to US from $ 607.90Yes, we ship to United States of America!
Customer service
Log in
All countries
Menu
dmLights
Subscribe to our newsletter
The latest lighting trends, novelties and promotions.
Like us on Facebook
Stay informed about our campaigns and get inspiration.
Like us
Follow us on Instagram
Discover the latest trends and novelties in the world of lighting.
Follow us
dmlights
© 2014 - 2020 dmlights(Elektriciteit Paul de Meutter CV)

The content of this Website, including trademarks, patents, copyrights, database rights, drawings and models, images, company- and product-names and/or other (intellectual property rights), are protected by intellectual property rights belonging to dmlights or any rightful third. You shall not use and/or change any of the protected content as described in the present article, including any copying, lending, reproducing, any use of dmlights’ database content or any use in whatever way, without prior written authorization by dmlights. Any infringement shall be prosecuted under applicable laws.

The e-mail address could not be found. No email was sent.
No account yet? Create an account