The story behind iconic lamps 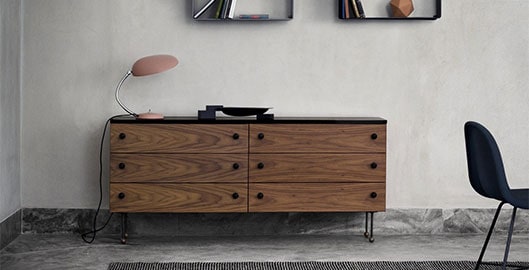 Some lamps have been around for decades; so long sometimes that we’ve attributed happy memories to them. Memories of your dad reading to you, of your first ‘real’ lamp in the house, or your faithful friend fighting off the shadows in your bedroom. Yet there are other stories behind a lot of designs. The influence these lamps have had and still have is not to be underestimated. We’ll tell you the stories behind some very iconic lamps in this blog post.

Greta Grossman became a household name in the design world during the Second World War. It’s a little surprising since few women were publicly applauded for their achievements back then. Highly regarded newspapers and magazines were all too happy to publish her designs. These were numerous and included industrial design as well as interior design and architecture.

In 1933, Grossman had a shop and workshop in the heart of Stockholm and became the first woman to win an award from the Stockholm Crafts Association. The threat of the Second World War caused her to flee Europe; she and her husband moved to Los Angeles. Many influential designers from Europe came together there, thus ensuring the entrée of European Modernism into the United States.

Greta Grossman emerged as one of the pioneers of Californian Modernism. As a result, she quickly became part of the American elite and acquired a much richer clientele.

The most iconic products that Greta designed during her heyday are the Gräshoppa floor lamp and the Cobra collection. The Cobra won the Great Design Award in 1950, which only increased Grossman’s popularity. Her designs have been displayed in museums around the world, including the Museum of Modern Arts in New York.

When Greta decided to leave design and architecture behind at the end of the 1960s, she was practically forgotten over the course of time. Fortunately, the Danish design company Gubi rediscovered her work and started reproducing her iconic designs. Today, Grossman’s designs are major collector’s items and are sold at auctions all over the world. If something says ‘Made in Italy’ on it, it usually means quality, style, and a touch of bourgeoisie. This is partly thanks to the Tolomeo, a lamp designed by Giancarlo Fassina and Michele de Lucchi in 1987.

De Lucchi was a notorious ‘anti-designer’ who didn’t want to make his creations crazier and more creative, but rather simpler and more practical. This was exactly what people were looking for at the beginning of the information and computer age. Thanks to Giancarlo Fassina’s extensive knowledge of industrial design, the duo set a new standard for modern Italian design. In 1989, the Tolomeo won the highest prize for industrial design: the Golden Compass (Compasso d’Oro). This timeless design also remains the most frequently used designer lamp on film sets, thanks to its subtle yet powerful appearance. One last example that should certainly not be missing from this list: the Anglepoise Original 1227. This world-famous design is known as Great Britain’s most iconic lamp. The origin of the design lies in the industrial sector, where the lamp’s flexible and stable design proved extremely useful.

Not much later, the Anglepoise Original 1227 was developed as an interior alternative. The lamp soon found its way into the homes and hearts of countless British households. The love for this design even went so far that the lamp became ingrained in the culture. Music albums and video clips were made with the Anglepoise lamp as a source of inspiration. The lamp was even immortalised in a Royal Mail stamp in 2009. You can still get it in Great Britain, by the way. Do you have one of these iconic designs in your home? Please let us know in the comments.