The extraordinary story of Flos Parentesi Fifty years: that’s the exact age of one of the most popular lamps from Italian designer label Flos. Today, we are discussing the Parentesi, an extraordinary floor lamp that connects ceiling and floor with the help of a steel cable. This beautiful design by Pio Manzù and Achille Castiglioni has a very special story. A story of originality, passion for everyday objects, and respect for each other’s creativity.

The Parentesi story begins in 1969. Brilliant people often die too young, and such was the case for Pio Manzù, an exceptionally talented Italian designer. Manzù had a promising future, designed numerous inventive concepts and is the creative spirit behind the Fiat 127. Just before his most important creation for Fiat appeared on the road, he died unexpectedly at the age of 30. 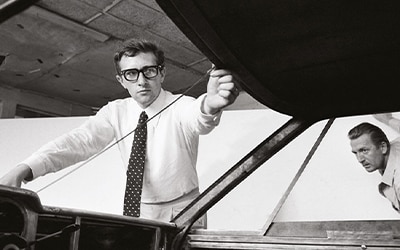 Despite his young age, Pio Manzù was awarded many international prizes. Achille Castiglioni, a true pioneer of Italian design and one of its most influential designers, was also familiar with Manzù’s work. The two never met, but thanks to Pio Manzù’s widow, Castiglioni was able to look at his drawings and sketches.

The simplicity of everyday objects

One of these drawings immediately caught Castiglioni’s eye. The sketch showed a lamp resting on a rod connecting the ceiling and floor. Thanks to a screw, the lamp could be turned a quarter turn and moved up and down. And thus, the original idea for the Parentesi was discovered.

Pio Manzù was obsessed with simplicity, cost reduction, and everyday objects. Three properties that are also found in the Parentesi floor lamp. All the elements were there for Castiglioni to fall in love with this design: it was an airy, flexible design that could be used in any interior. Manzù’s drawing also showed potential for more movement. Castiglioni made some minor adjustments that made it possible to hold the lamp in position without a screw, and the metal rod was partly replaced by a cable that stays under tension thanks to a 5 kg base and a tension mechanism. He worked closely with technicians from Flos, after which the Italian design brand finally launched the lamp in 1971.

The Flos Parentesi floor lamp has a light and airy design, making it flexible, dynamic, modern as well as timeless. The light source is a simple balloon that can be rotated 360° and moved up and down. It is a very practical and stylish lamp that suits practically any interior design style.

On the occasion of the Parentesi’s 50th anniversary, we get to see two new, cheerful colours: orange and turquoise. The first colour is a tribute to Pio Manzù, who always used orange in the prototypes and designs for his cars. The turquoise version of the lamp is released in honour of Achille Castiglioni. He uses this colour when designing interiors, not to mention, it’s his favourite colour. The packaging of these two new versions of the Parentesi floor lamp also deserves attention. Flos is in fact using the same type of packaging for the very first Parentesi lamps from 1971. We can also count on sustainability: the packaging is made from recycled materials and is, in turn, completely recyclable. To this day, Castiglioni still shares the creation of Parentesi with the late Pio Manzù. Not only to honour him, but also out of respect for his work, creativity, innovative vision, and his short but impressive career.